A Day in the Life without a Union

The document below represents the contract between teachers and a school district in Wisconsin for the current school year.

This is the entire contract.  Well, not exactly.  There is a second page consisting only of the signatures of teacher association leadership and the Kenosha Board of Education. 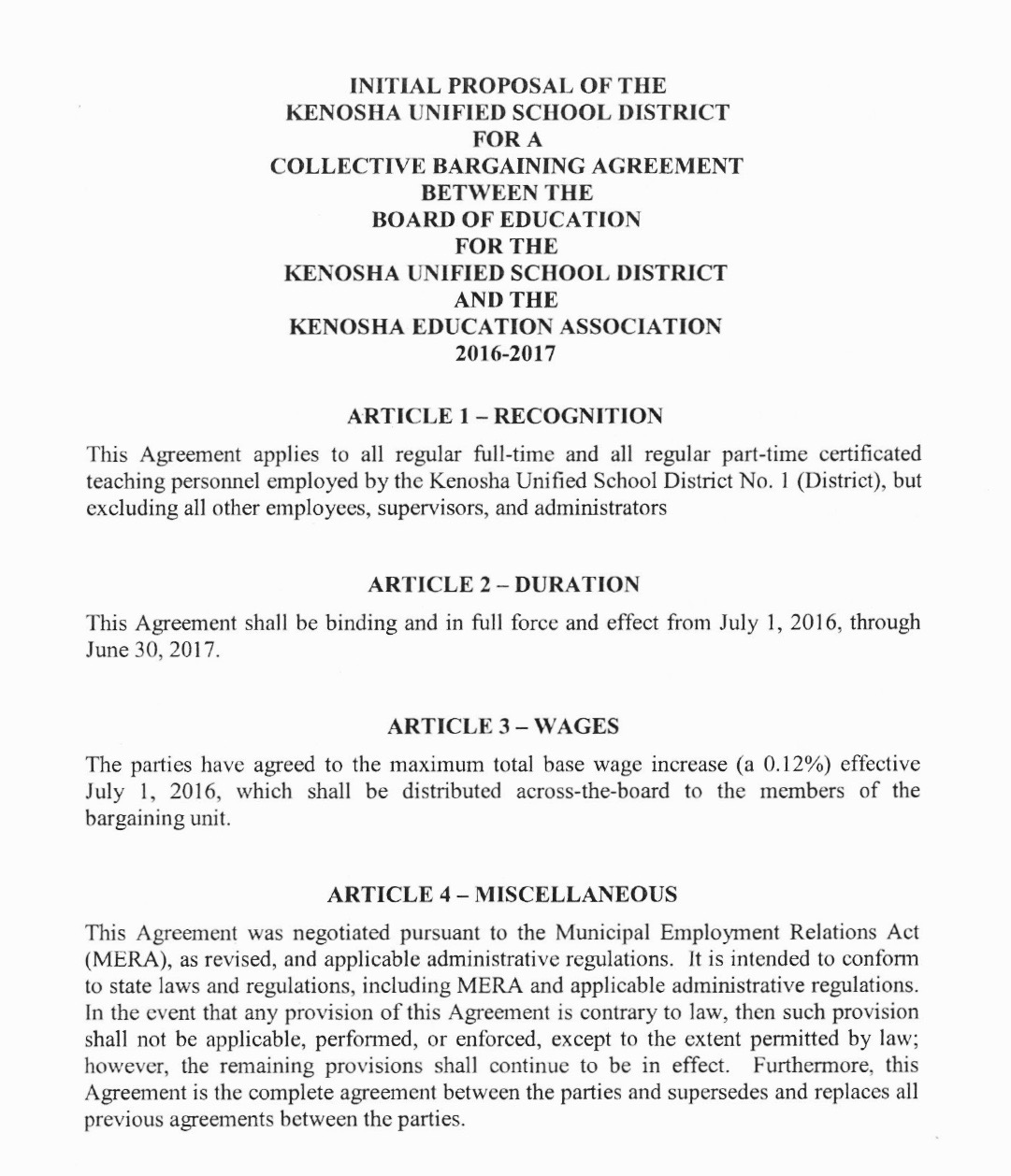 There is no mention in this contract about medical benefits, nothing about a pension system, tenure or fair dismissal procedures, nothing about working condition requirements, grievance procedures, length of work day, class-sizes or stipends for work outside of regular school hours.

Wisconsin is one of a number of states that have stripped away the rights of unions to collectively bargain for wages, benefits and working conditions.  These so-called “Right to Work” states have decimated the ability of workers to advocate for their interests.  In some of these states, unions are outlawed from bargaining for anything other than wages and are forced to recertify as a union each year or risk losing any right to represent their members at all.

Could this happen in our state?  We all hope not.  But, if it were to happen, what would be the easiest way for those who are anti-union to make it happen?

A vote on a constitutional convention is set for next November.  Every 20 years the state has to ask the voters if one is needed.  The truth is, one is not needed.  Changes to the constitution can be made in the state congress in Albany without an expensive, politically driven process such as a convention.

Twenty years ago, the people of New York voted no to a convention.  20 years before that, a convention was held that produced nothing but ideas that were ultimately shot down when put up for a vote.

A constitutional convention is an antiquated line item in our state constitution that is no longer necessary in the modern day.  However, because it still exists a vote must be held every 20 years.  Those who stand to lose rights, wages and benefits as a result of a convention must stand together to ensure that the results of such an election are strongly and convincingly against having one.

What is at stake if a convention is held?  Well, everything!  To start with, our pensions, workers compensation, environmental standards and the right of every child in our state to a public education.

Please watch the video below put together by our friends at UCOMM.  It explains clearly what is at risk next November and why everyone with something to lose must help to make sure a constitutional convention does not come to pass in our state.

No one wants a contract like those poor teachers in Kenosha have.