What If Janus Didn’t Matter?

If you read The Levittown Teacher or follow the news, you know that in recent years attacks against public education and organized labor have come at a fast and furious pace.

On Election Day, we joined together to defeat a constitutional convention proposition that could have stripped away the rights for our children to a quality public education and many of the benefits our unions have worked so hard to earn for us.  As we look ahead, new battles against our union and the schools we love are lurking out over the horizon.

Some say the next major challenge to unions will come from a ruling by the Supreme Court.  Later in this newsletter, you will see an article with details about the Janus v. American Federation of State, County, and Municipal Employees, Council 31; the “Janus” case.

Just like the Friedrichs v. California Teachers Association case of 2016, Janus, is an effort by corporate interests to weaken the strength of public unions and increase their profits.

A ruling against unions in Janus, would reverse over 40 years of established law and allow those who receive the benefits of union collective bargaining to “opt-out” of paying a fee for those benefits.

… the end result of the attacks on the rights and

values Americans hold dear has been a rebirth

of passion for those rights and values.

Studies estimate that if workers were allowed to “opt-out” of paying what is commonly referred to as an agency fee, union membership and the funding needed to provide essential union services could drop by over 30%.  The consequences to unions could be devastating.

But what if that isn’t what happens?

There is no question that we are living in a volatile time for our democracy. Issues of established law and established social order are being challenged on a daily basis. In this somewhat unstable time, one thing that has become quite clear is that when the rights and values of hard-working Americans have been challenged, hard-working Americans have risen up, in large numbers, to defend those rights.
Whether it has been the rights of immigrants to enjoy the same opportunity to pursue happiness as our ancestors enjoyed, the rights of Americans to have access to health care, or the rights of our children to have a strong public education system, Americans have stood up in staunch opposition to those who have attacks those things that are a core part of our nations’ D.N.A.
In all cases, the end result of the attacks on the rights and values Americans hold dear has been a rebirth of passion for those rights and values. The truth is that in the majority of instances, that which has been placed under attack has come back even stronger than it was before.
Couldn’t the same thing happen to unions?
I say to all of you that should the Supreme Court rule in Janus, as most expect they will, that union participation is optional, the ruling will embolden the resolve of those who receive and enjoy the benefits of union membership. And the possibility of union workers losing the rights and benefits that they have worked for and earned will rally all of them to join together to protect those rights and benefits. 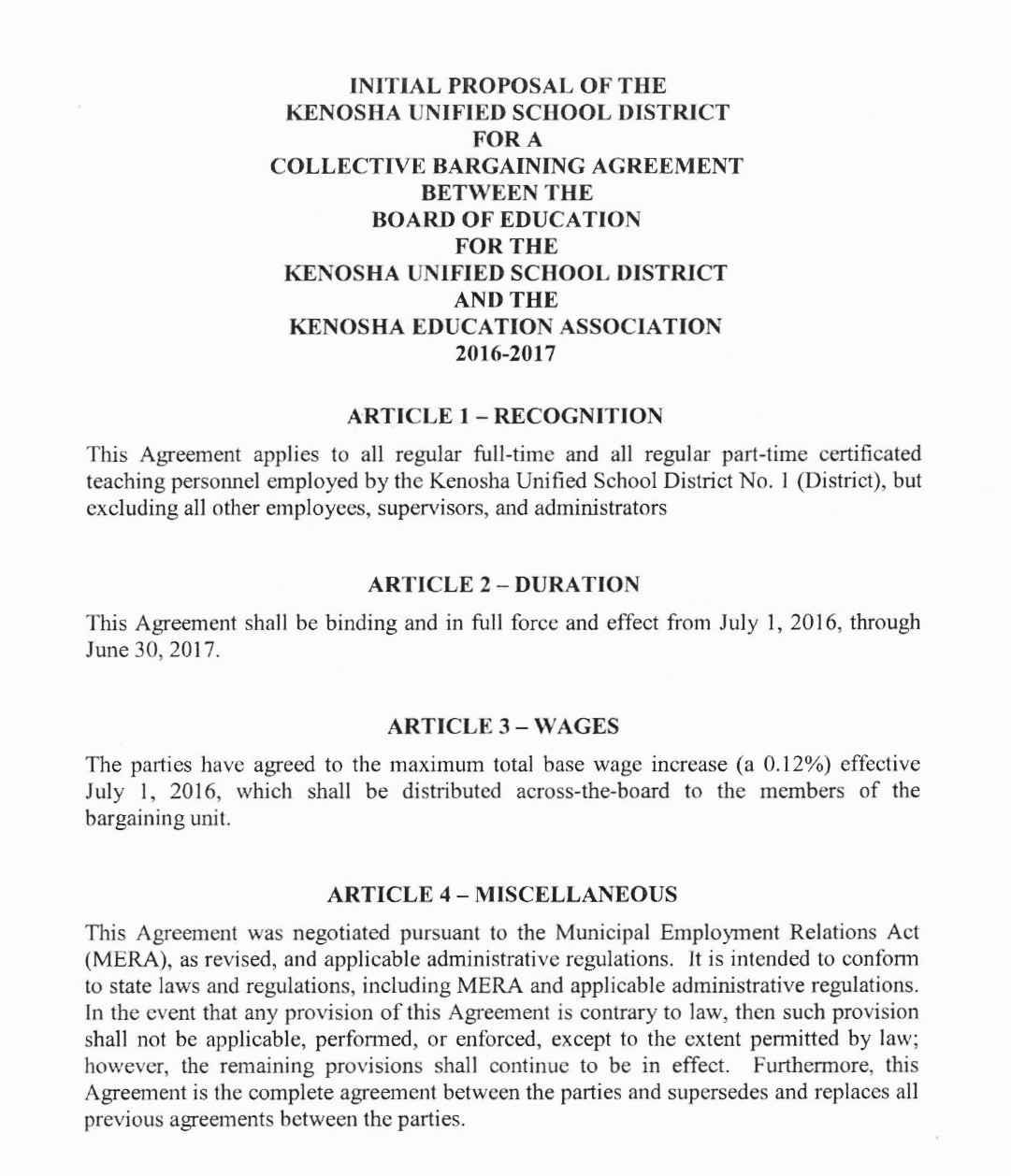 The contract above comes from a state that has significantly weakened the unions that represented teachers to such an extent that the rights and benefits of teachers in this district are limited solely to the information on this document.   No tenure rights, no due process before termination, no step movement, no supplemental benefits like dental and eye care.  Nothing.

There is an old saying that things sometimes need to get worse before they can get better.  Perhaps it is time for those who have enjoyed the rights and benefits of union membership over the past 40 years to be faced with losing some of them so that they can not only push back, but end up making things even better for future generations.

The fact remains that barring another unexpected change in the makeup of the Supreme Court, unions will be dealt a severe blow in the court’s ruling in the Janus case.  Our choice is whether to make the ruling the beginning of the end of unions or the start of a renewed sense of passion and energy for all we have earned and all we can stand to gain in the years to come.  It is up to all of us to make sure that our friends and colleagues understand the value of union membership as something which they should want to contribute to, not because they have to, but because they want to.  What doesn’t kill you makes you stronger.  The  Janus case won’t kill us, so where we go from here is up to us.